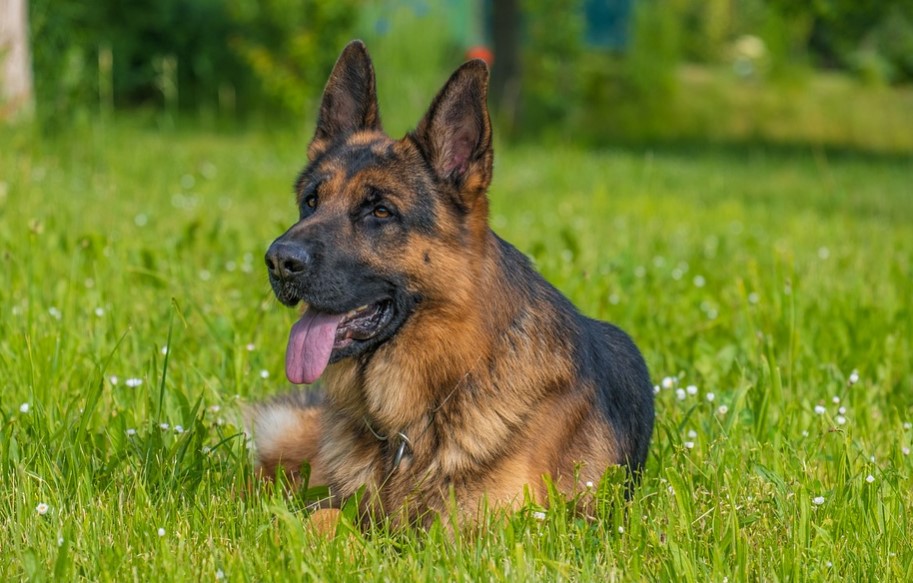 If you were looking to adopt an intelligent and cute puppy that you could play with, go on walks together, and who would also protect you & your home by being the most vigilant guard, then you must look no further than the German Shepherd.

German Shepherd is perhaps the most widely recognized and loved dog breeds in the world. They are one of the best guard dogs that are so good at it that almost all of the police dogs in the USA are German Shepherds.

The German shepherd is a working dog developed for herding sheep. But in modern days it is used for many types of work, including disability assistance, search-and-rescue, police and military roles, and acting.

How Many Types of German Shepherd Dogs are there?

These cute yet ferocious little bodyguards are categorized into two breeding types, the “working line” and “Show Line.” You would be surprised to know that there are 5 different types of “show line” German Shepherd dogs that you can find. The most popular distinction that separates them among their different types is the color of their coats.

List of 5 different types of German Shepherds based on their looks and coat patterns:

The German Shepherd dogs of this type are also called Saddle Back Shepherds. They are the most recognized German Shepherds of all time. There are two colors present on their coat, as with all other German shepherd types apart from the solid black shepherd. It is their distinct pattern and markings that set them apart from the other types.

The ‘saddle’ in the name “Saddle Coat German Shepherd” refers to the black fur patch on the back of the dog, which resembles the shape of a saddle on a horse. Quite a lot of people also call this type of fur pattern as ‘blanket’ pattern, which is also appropriate in the sense that the black fur represents a blanket on top of them. The color on the fur other than the saddle part is usually tan and sometimes red.

These types of German Shepherd dogs are also called ‘Solid Color German Shepherd’. They are much less common as compared to the saddleback German Shepherds. You would also sometimes find accents of powdered blue color on their coats, but this is rare and these types are not considered to be solid by various dog breeding competitions.

If a German Shepherd has this blue pigment on his or her coat then your puppy would surely be accepted in the competition, but they would lose points because of their color.

Panda German Shepherds have a striking appearance of white, black, and hints of tan. They are called “Panda” because of the similarities in the appearance of their coat with pandas. Mostly their belly, chest, mouth is white in color, their back is dark and their legs are tan. This type of fur pattern is not considered to be very common.

The Panda like the appearance of these dogs is due to a genetic mutation. Having this pigmentation on their fur does not mean that they are a mixed breed as a lot of people might tend to think. Having this type of fur color might make some breeders skeptical about the health of the dogs, but they are as agile, healthy, and strong as any other German Shepherd Dogs.

The Sable German Shepherds are one of the most beautiful and unique dogs in their appearance. They are technically referred to as ‘agouti’ in many regions. This pattern known as Sable or Agouti does not manifest in a patchy manner as it does with the saddleback or the panda German Shepherds.

In fact, this unique color pattern of fur develops all over their body. The agouti shepherds are not born looking like this, the color of their coat develops gradually and becomes stronger as they get older. Some colors may be more dominant than others due to their genetic predisposition.

Usually, the color of their coat is an amalgam of black, grey, tan, or gold. At the time of their birth, the Sable German Shepherd puppies are generally tan in color and then their coat begins to develop stronger colors as they get older.

The white German shepherd is also a part of the Solid German Shepherd type. The only difference is that the dominant color of their fur is white instead of black which makes them genetically predisposed to develop beautiful and luscious white fur.

The only genetic difference between the two Solid German Shepherds is that the Black Shepherds have their color due to a recessive gene, whereas the White Shepherds have their color due to a dominant gene. You should not confuse white German shepherds with albinism because that is a completely different genetic factor. These white German shepherd breeds are very rare, this could be due to their disqualification from the competitors.

They make exceptional family pets and guard dogs. These dogs are often recruited by police departments, search and rescue teams, and other such organizations that require an intelligent and capable working dog.