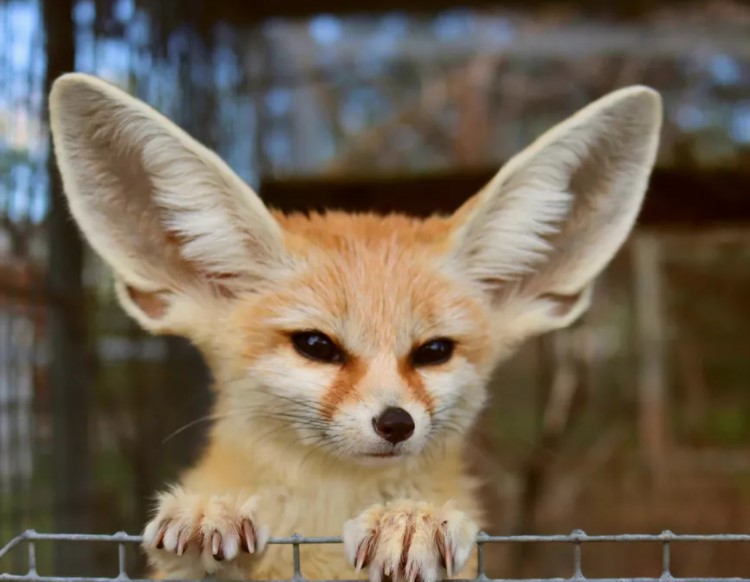 Fennec, (Fennecus zerda), desert-dwelling fox, family Canidae, found in north Africa and the Sinai and Arabian peninsulas. The fennec is characterized by its small size (head and body length 36–41 cm [14–16 inches], weight about 1.5 kg [3.3 pounds]) and large ears (15 cm or more in length). It has long, thick, whitish to sand-coloured fur and a black-tipped tail 18–31 cm long. Mainly nocturnal, the fennec spends the heat of the day underground in its burrow. It feeds on insects, small animals, and fruit. Its litters of two to five young are born after a gestation period of about 51 days.

The name fennec is sometimes erroneously applied to the South African silver fox and to Ruppell’s fox (see fox).

Although fennecs typically live in groups in the wild, they tend to be somewhat independent as pets. They might enjoy playing with their humans at times, such as an energetic game of fetch. But then there will be other times when they prefer to play alone. In addition, the majority of pet fennecs will allow people they know to pick them up, but most don’t seem to enjoy handling overall.

Fennecs are cautious by nature, and they are quick to flee if something frightens them. While most would rather choose flight over fight, they will bite if something truly angers them. Some fennecs, especially unneutered males, will also mark their territory with urine—including the inside of your home.

These animals make a variety of vocalizations to express their moods, and some can be very loud. They’re certainly not a good fit for someone who prefers a quiet pet. Some fennecs will get along with other household pets, especially dogs and cats around their size. Introduction at a young age will help them coexist more peacefully with other animals, as well as bond with their human family members.

Expect to spend a lot of time and effort keeping your fennec exercised. They are quick, active, and agile animals. Fortunately, many fennecs will adapt to their human schedule, rather than remaining nocturnal. Fennecs can be trained to walk on a leash, which helps to get some of their energy out each day.

As desert animals, fennecs require temperatures of at least 68 degrees Fahrenheit. If you live in an appropriate climate, an outdoor enclosure that’s as large as possible is ideal to give your fennec some exercise. Many people make their own outdoor pens out of wood and wire screening. The pen must be designed to prevent your fennec from digging under or climbing over the walls, both of which these foxes are quite good at doing. (They can dog holes 20 feet deep!) To stop your fox from digging under the walls, build the pen over pavers, concrete, or wood decking, preferably with a layer of sand or dirt over the top for a more natural environment. And either angle the fencing in at the top, or cover the whole top of the enclosure with screening.

You can let your fennec run around in a fenced yard, as long as you have a secure 5- to 6-foot fence. But always supervise your fox to make sure it doesn’t start to climb or dig under the fence. You also can put your fox on a long leash to let it run around outside, as long as it’s under your supervision.

While indoors, your fennec will likely jump on furniture and could potentially knock over decorations and other items as it plays. So it’s important to put away breakables and anything that might injure your animal. Fennecs generally should be kenneled when you’re not able to supervise them simply because they will get into everything. If you don’t have a suitable outdoor pen, use a dog crate indoors.

Furthermore, some fennecs can be trained to use a litter box indoors. A covered box works best due to their tendency to dig. (A lot of litter will fly out of the box otherwise.) The training process involves taking the fox frequently to the litter box and giving lots of treats when it succeeds in using the box. You can use the same method to train the fox to relieve itself outdoors. Never punish an animal for accidents in the house.

What Should a Pet Fox Eat to Stay Healthy?

In the wild, fennec foxes are omnivores that eat a varied diet of meat and plants, including rodents, birds, insects, and fruit. An optimal diet for a pet fennec fox is a commercial wild canid diet, which is what many zoos feed them. But most owners feed their fennecs a mix of dog food, cat food, vegetables, and fruit. It’s especially important to make sure a fennec’s diet has an adequate amount of taurine, an amino acid that’s key for many metabolic processes in the body. Consult your veterinarian on the right quantity and variety for your fox, as this can vary depending on age, size, and activity level.

Most owners feed meals twice a day, though you should follow your vet’s recommendations on this. You can simply put the food in a bowl for your fox, or you can hide some in a treat puzzle to give your pet some mental enrichment. Also, provide a bowl of clean water at all times.

Is It Legal to Own a Pet Fennec Fox?

Laws about owning a fennec fox vary widely depending on the jurisdiction. Most parts of the United States have some regulations regarding fennecs—from outright bans to simply requiring a permit. Plus, some local laws might conflict with state laws, so be sure to check the regulations for exactly where you live.

Moreover, it is vital that you acquire your fennec from a reputable breeder or rescue organization. While the odds are slim that you’ll find a seller of wild-caught fennecs in the United States, it’s still important to ensure your fennec was captive-bred. These animals generally adapt to life in captivity much better than an animal that previously lived in the wild.

Expect to spend around $1,500 to $3,500 on average for a young fennec from a reputable breeder. A price less than this is usually a red flag and potentially the sign of some sort of scam. Also, you might have to travel a great distance to a breeder, as there aren’t that many across the U.S. Some sellers will ship their foxes to you, but this can be very stressful for the animal. Plus, it’s best to check out the animal and the seller in person before committing.

Make sure the seller can give you thorough information on the animal’s origin and health history. Also, try to secure references from other people who have gotten a fox from that seller to make sure the seller is trustworthy. In addition, breeders should be licensed by the U.S. Department of Agriculture. While they’re more expensive, it’s best to acquire a newly weaned young fox, rather than an adult. You’ll have better odds of your fox growing up to be tame and friendly this way. A healthy fox will typically be alert and active, though it might be shy around you at first.