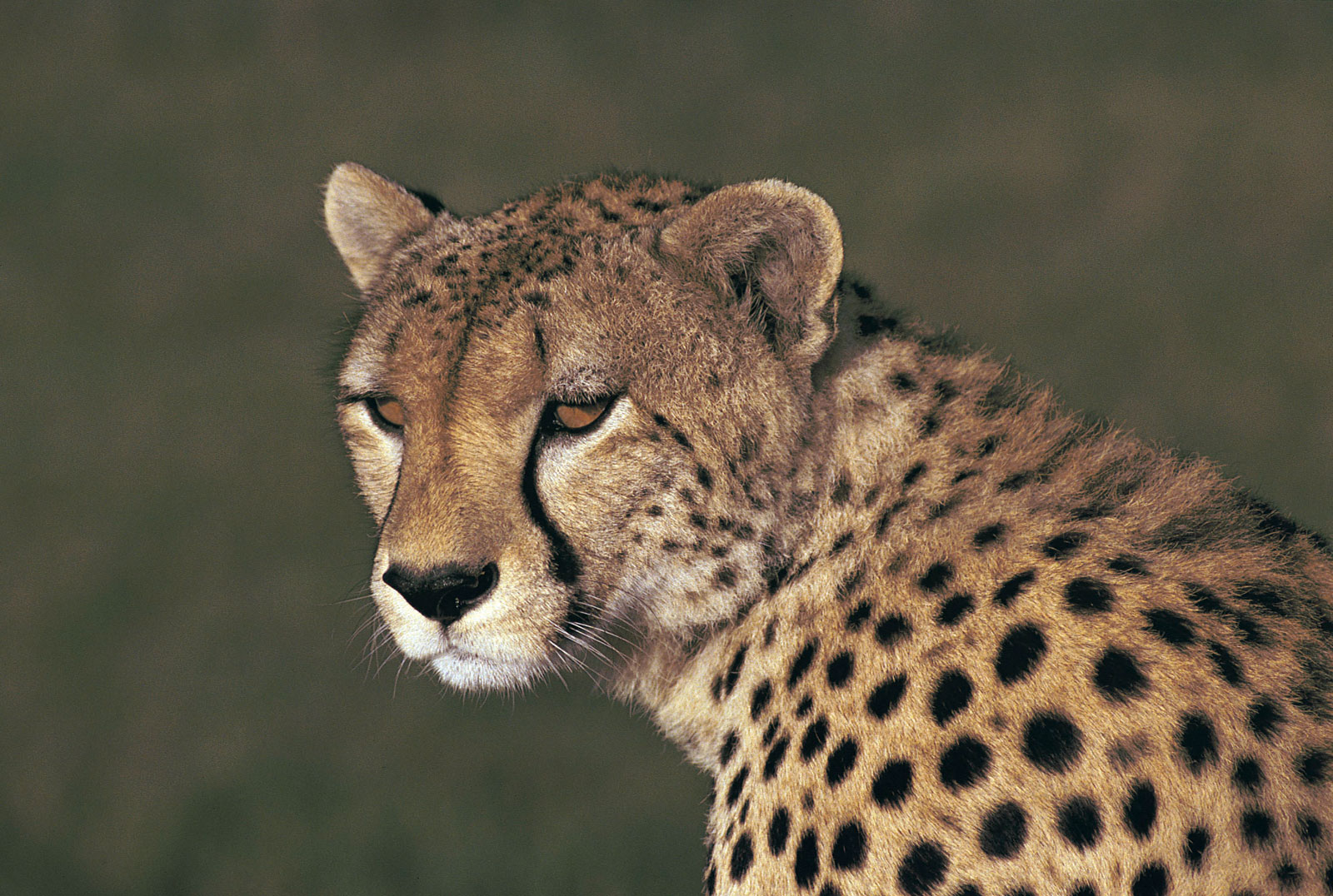 cheetah, (Acinonyx jubatus), one of the world’s most recognizable cats, known especially for its speed. Cheetahs’ sprints have been measured at a maximum of 114 km (71 miles) per hour, and they routinely reach velocities of 80–100 km per hour while pursuing prey. Nearly all the cheetahs remaining in the wild life in Africa.

Cheetahs are covered almost entirely with small black spots on a background of pale yellow and have a white underbelly. Their faces are distinguished by prominent black lines that curve from the inner corner of each eye to the outer corners of the mouth, like a well-worn trail of inky tears. Cheetahs have a long, slender body measuring 1.2 meters (4 feet), with a long tail (65–85 cm [2–3 feet]) that generally ends in a white tuft. They are about 75 cm tall at the shoulder. Weight ranges from 34 to 54 kg (75 to 119 pounds), males being slightly larger than females.

Cheetahs have evolved many adaptations that enhance their ability to sprint. Their legs are proportionally longer than those of other big cats; an elongated spine increases stride length at high speeds; they have unretractable claws, special paw pads for extra traction, and a long tail for balance. Internally, the liver, adrenal glands, lungs, bronchi, nasal passages, and heart are all large to allow intense physiological activity. During a chase, cheetahs take about 31/2 strides per second and 60 to 150 breaths per minute. Chases are usually limited to sprints of less than 200–300 meters, however, because the increased physiological activity associated with running creates heat faster than it can be released through evaporative cooling (sweating through their paws and panting).

Early taxonomists interpreted the numerous specialized traits of cheetahs as evidence that they diverged from the other cat species early in the evolutionary history of the cat family (Felidae). The cheetah was therefore granted unique taxonomic status, and since the early 1900s it has been classified as the only species of genus Acinonyx. Cheetahs are often divided into five subspecies: A. jubatus jubatus in Southern Africa, A. jubatus fearsoni (including A. jubatus velox and A. jubatus raineyi) from eastern Africa, A. jubatus soemmeringii from Nigeria to Somalia, A. jubatus hecki from northwestern Africa, and A. jubatus venaticus from Arabia to central India. The king cheetah, once thought to be a distinct subspecies, is a Southern African form that has a “blotchy” coat pattern presumably from a rare recessive genetic mutation.

Numerous molecular genetic studies suggest that the cheetah shares a common ancestor with the puma and jaguarundi, from which it diverged six to eight million years ago, probably in North America. Fossils attributable to cheetahlike species dating from two to three million years ago have been found in North America in what is now Texas, Nevada, and Wyoming.